Disclaimer: directions and/or nearness to an axis do not represent anything about the people/groups in the graph. The graphs are unitless and directionless and are my way of simplifying change in multi-dimensional genetic space into a nice-ish looking 2D graph.

When we talk about diversity in the context of genetic engineering I mean a couple of things.

Here is the Merriam-Webster definition just because.

Not to suggest that this encompasses all diversity because it’s just a metric which can be applied to anything from furniture to laundry. However, some of the claims about diversity I see brought up when talking about genetic engineering are the Gattaca scenario. Where not only is everyone “perfect” in the same physical ways, but they have the same mannerisms, ways of dressing, and even haircuts. So a genetically engineered dystopia of definition 1 would be where everyone ends up looking like last generations cultural icons, and a definition 2 dystopia would be where your acquired differences are the results of your “generic conditioning” and all doctors look and act the same, and every politician says the same thing, and all 30-ish Instagram models are Mormons. (This is a lot like how groupthink and clustering end up working out today, inclusions of genetic modification are more useful as a thought experiment than a critique. Just because everyone ends up with purple hair doesn’t mean we style it all the same.)

But back to definitions:

When biologists use the word diversity, isn’t just a measure of the number of species, its also a measure of evenness. The term richness describes the absolute number of species. In terms of fruit basket, you could get one with kiwi, apple, grapes, watermelon and honeydew. But its not a very good basket, 90% of this ‘fruit’ salad is honeydew, this basket is high in richness but not in diversity. A diverse fruit basket has the same fruits as the bad one, but they are balanced so that each fruit is equally represented. If anyone cares I think it should be balanced by weight and not the number of pieces.

Both communities are rich, but community 1 has much more diversity than community 2.

I started out by trying to define these already defined terms because in my opinion the warnings that genetic engineering will decrease diversity is more a dog whistle and an attempt at fear mongering than a good critique. I think designer babies will increase richness; and while diversity might decrease, we aren’t focusing on the loss of diversity in the right traits.

A child’s genetics are limited by the genotypes of their parents. A child can’t be born with genes either of their parents didn’t have except in the rarest edge case; and children always get half their genes from one parent, though expression is different for each parent. The genetic space that a child can occupy is the average of the “genetic locations” of the parents. (Very oversimplified but whatever) Colloquially, I bet you can think of family members or friends who bear this out. When we bring genetic engineering into the mix, we can introduce genes which the parents did not have or fix broken genes they carry (either way, adding/changing genetic information). Introducing or modifying these genes “pushes” the child into a new genetic space. 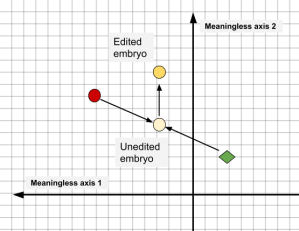 Imagine an elementary school only for GE’d kids. Evil Corp subsidized a set of modifications 7 years ago so that every kid in the 1st grade class is the same height plus or minus an inch. This group has practically no diversity when it comes to height compared to all other 1st graders. However, they retain their diversity along every other measure, skin color, culture, hours of sleep, and their diversity mirrors that of the whole set of 1st graders nationally. They decreased in diversity along one measure without modifying others (big assumption about variable non-dependence but analogy…)

I found this clip funny since a possible take-away could be that Fareed Zakaria would choose to design a blonde haired, blue eyed child.

I have no studies to back this up, but it feels like most people would choose to start with their own genetic material and make edits from there. I have a hard time imagining a mother and father sitting down and deciding that they should start with a stranger’s genetic profile and go from there. As an extension of that, I feel like most people would not modify features that would exclude their kid from the ethnic/cultural group the parents belong to. If a family self-identifies with the fullness of their mustaches, it seems unlikely that they’ll choose a kid that doesn’t have facial hair.  It also seems unlikely that white farmers in the American heartland would make edits that produce a child with Mongolian features and traits. The reverse also probably applies; though in places where skin/hair/eye colors act as status symbols this norm will probably be challenged more often. (P.S. I hope we get past things like that before the technology matures. (P.S.S. That example above would take THOUSANDS of edits and would be easier and better to just adopt. (P.S.S.S random shout-out to adoptive parents everywhere, you’re underappreciated by your adolescents and the world at large.)))

In a world with a high cost to genetic engineering, parents will initially invest in what they believe their child won’t get from them or an enhancement of what their parents already value. Anyone insecure about their height might invest in a taller child, while those who measure their value by how many Olympic gold medals they have would probably double down on the traits that got them to the Olympics. So, I put forward that as prices drop, people will increasingly exercise their freewill (as opposed to economic/social pressures) in deciding how they want to make the edits and as the cost drops to a negligible amount, children will be increasingly endowed with the diversity in their parent’s heads instead of the diversity in their genome.

For a great example of a high friction environment, go read Change Agent. Great book, but a little more sci-fi than Gattaca was.

In a world of medium to high cost genetic engineering, no matter what health/cosmetic edits are made they will be generally limited by cost and Fareed Zakaria’s kid will almost certainly be more genetically like him than to just about anyone else. The scale of changes needed to push my kid into the genetic territory of someone else’s is on the order of millions bases, assuming a 99.9% genetic similarity. The children will be more similar on metrics like lack of major diseases, height, and low insurance premiums but they carry all the inherent genetic diversity of their parents.

So, let’s string this all together! Most people start with their own embryo given the choice and make edits from there. While diversity (and richness) might decrease across edited traits (health), total genetic diversity is about entirely the same because changing one gene in 20,000 is a 0.004% change in the whole genome. As prices begin to drop parents will choose to get more edits, this will have the dual effects of decreasing diversity in specific genes (more people picking ‘good’ genes decreasing evenness) while also increasing the richness of genotypes (creating new genotypes that haven’t existed or have been extremely rare). As the price drops to zero, cultural diversity will exert itself more fully, the extent and choices of editing will be culturally restricted instead of cost restricted. Most kids will retain their inherited genetic diversity, but the low cost allows the minds of the parents (cultural diversity) to have a larger role in shaping their genome. The inherent diversity of peoples and their cultural diversity will multiplex increasing the number and evenness of a wide variety of traits. The only decrease would come from unpopular (read as harmful) traits which are generally the ones already selected against by our created environment. Genetic diseases would be greatly reduced but I think most people would be okay with less diversity in health and negative traits.

Now for the twist!

In the context of genetic editing and overall human survival, the diversity and richness that we should worry about is all biochemistry and proteins not macro traits like hair color.

Cosmetic differences don’t add a lot to our ability to survive hardship. Your blonde hair doesn’t really help you survive the plague, eye color won’t prevent a comet or volcano. You could make an argument that levels of pigmentation (skin color) might make a difference but vitamins, clothing, sun screen, and sun lamps provide enough protection in hot and cold climates. The genetic diversity that will help you survive a plague is going to be minor variations in receptors and surface proteins. The genetic diversity that will help you survive a volcano/comet (new summer movie?) will be the ability to not get cabin fever and make your own vitamin D and C while living underground. These aren’t really traits we talk about when we talk about designer children, yet they might be most important for the robustness of humanity.

If you’re interested in HIV immunity for you child I suggest the CCR5-D32 mutation. Make sure you have the right PARK2, PACRG, TLR2, LTA, and TLR1 alleles to avoid leprosy. If you want to help your kid survive the nuclear winter or life in a bunker, consider reactivating their L-gulonolactone oxidase, so they can make their own vitamin C and avoid scurvy. If you want your child to have a better chance at surviving the super-plague of the future I suggest you pay out the ass for genetic modifications to their antibody production, but be careful, new antibodies may cause autoimmune diseases. If you have a lot of money just swap the chirality of your kid but be prepared to pay out the ass for customized food (read Change Agent, really). While they are least likely to be edited, creating a monoculture of immunity could be the result of ‘enhancing robustness’. One copy of a sickle cell mutation is protective against malaria, two copies results in a painful disease. Even protective monocultures are still monocultures and are extremely susceptible to disruption.

But I think I’ve made the case that future generations will be in no means cookie cutter.

Curing your children of known genetic diseases probably won’t affect their innate immunity, a benefit of starting with your own embryo instead of a “template” but giving your child a biochemical and receptor diversity, distinct from others, might benefit us all in the long run.

View all posts by dissidentgenetics