So, CRISPR is a thing. If that is news to you or you want a quick refresher see here. A decent amount of CRISPR coverage and debate has centered around “designer babies” and the inequalities that would arise if only the wealthy had access to these treatments. The idea of designer babies is that any wealth parent could pick and choose the traits their child would possess. If you’ve ever played “The Sims” you can imagine this process like the trait editor. You might want your child to have a cuter nose or black hair instead of brown. In the short-term however, most of these edits will probably be for disease traits as FDA approval is needed for therapeutics and human editing falls under that banner (FDA regulation and gene editing post later I promise). Just looking at the CRISPR Therapeutics pipeline page provides a good overview of some early stage targets (B-thalassemia, Sickle cell disease, hemophilia, and cystic fibrosis for the lazy (super interested in their delivery mechanism…)). While these aren’t quite the changes I would choose for my kid (night vision if you were curious) these therapies will help millions, soften the conversation around gene editing, and improve the technology so that designer babies aren’t so special. (P.S. CRISPR Therapeutics says they’re using lipid encapsulation for in vivo delivery.)

S.P.E.C.I.A.L stands for Strength, Perception, Endurance, Charisma, Intelligence, Agility, and Luck. While there are a lot of character creation schemes and I’m sure some of them are cool and useful, I have the most experience (and love) for this one from the Fallout franchise of games. In the games, as part of the character creation you can design the face and body of the playable character as well as assign points to each of the 7 categories which determine things like which computers you’re able to hack, how much you can carry, and how far you can run. And I guess luck? While designing your avatar you are restricted in the number of changes you can make and as a player you prioritize traits based on your play style. So, if you had the chance to give your kid extra points in those or other categories, would you?

If you assume a perfect world, there is about a 1 in 17,179,869,184 chance of CRISPR making an off target edit (a 17 base guide RNA and 4 choices of base = 4^17). That’s about 1 miss edit for every 5 genomes you edit. (All this math is super handwavy, I haven’t found good numbers on off target rates) Realistically the off target effects are probably more likely than 1 in 5 genomes, if not from the CRISPR directly, then from the editing process (according to this paper barely detectable also here, here, and here). A whole lot of research is going in to decreasing the error rate to something approaching or better than our perfect world example. Some methods use drugs or enzymes while other companies/schools make computer tools to make less error prone gRNAs. It might be far off, but it’s feasible that we eventually perfect both our editing and predicting so that mutations are non-existent or caught during quality control.

If you want to be an early adopter and are looking to genetically engineer your child you need to weigh the desired edits against the corresponding risk of off target mutations. Some of those mutations will certainly be cancerous while others may only increase your lifetime risk or have no effect at all (couldn’t find what the chance of a random mutation leading to cancer is. If you find it pm me). A small set of mutations will fall in protein coding or promoters and directly affect other bodily functions. While it would be fun to list all the ways this could go wrong (editing a gene for height but crippling the pituitary gland?), I’ve been told that’s not nice and will refrain for now. (Could you predict irony based on sequence and off-target sites?) Some parents will seek to maximize the number of changes while leaving their kid to bear the cost of possible off target edits. I think a majority of parents will stick to a few mutations with a sharp falloff after the “threshold”. Making as many changes as they can, while limiting themselves to what is generally considered as safe. Determining the ideal number of edits given a set risk of mutations requires more math than I’m comfortable working on today, but if you’re willing to bend the laws of inheritance to improve your kid’s genetics, you’ll probably shell out for a decent statistician. My bet is that this process (like all things) will be insured against future diseases in the child, and insurance companies will bear only a certain level of risk in the form of limits on the numbers of mutations and maybe even the type. 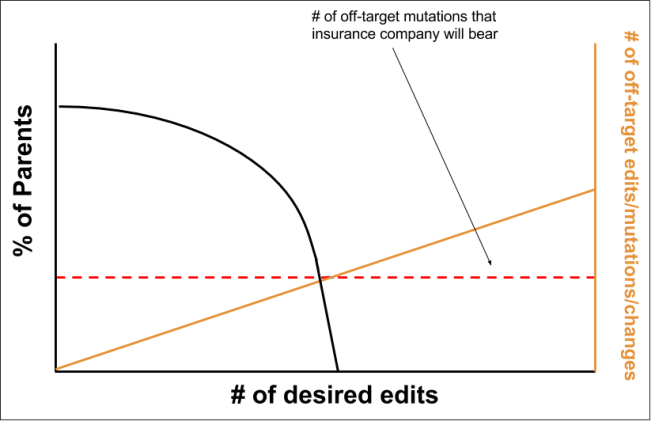 So… If there is an effective cap on the number of edits, X, and each edit after X bares a penalty in the form of a damaging mutation and/or lack of insurance. What do you use them on? How do you spend your points? Better muscles? A more symmetric face (can you do that?), or an athlete’s metabolism? How many points do you put into endurance, or agility, or perception? How about luck? If you are confined to the number of edits made, you have a system like Fallout or other RPGs. You’ll be able to make most of the edits you want, but you’ll need to prioritize. However, as science advances and the rate of off target edits decreases, kids will get less and less special. Parents will be able to make more edits without the risk of cancer, disease, or even worse, being uninsured.

View all posts by dissidentgenetics